This Notting Hill Townhouse Features a 3-in-1 Living Space 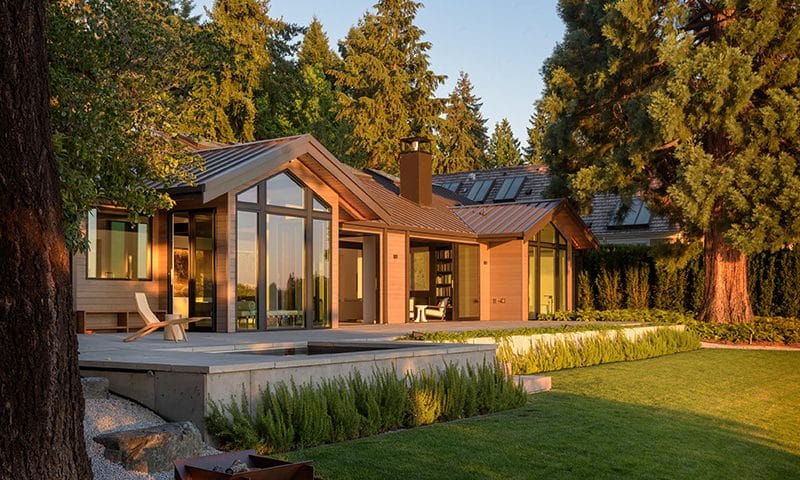 Award-winning architect Kirsten Murray, one of the owners and principals of AD100 firm Olson Kundig, discusses her approach to creating homes that integrate the old with the new

Kirsten Murray is a partner in the multi-award-winning, Seattle-based architecture practice Olson Kundig— helping it become one of Architectural Digest’s AD100 and one of Fast Company’s top 10 most innovative architectural firms. She has a special interest in multifamily dwellings and multiuse projects—striving to create buildings and spaces that strengthen and enrich communities—with an emphasis on integrating the old and the new. These include a media headquarters that won a Blueprint Award for best interior and the Tacoma Art Museum’s Haub Galleries, for which she won a Merit Award in AIA Washington’s Civic Design Awards.

How would you define your mission statement?

You’re asking someone who doesn’t believe in mission statements, but I’ve always believed people are happier and more productive, and communities more engaged and connected, in well-designed spaces. I think of myself as a planner; repurposing buildings really interests me, and I aim to design transformative experiences—to create spaces which enhance the everyday lives of those who live and work within them.

What led you to become an architect?

I became very aware at a young age of how space affected me. As an introverted child, I enjoyed the potential of the space under the stairs and other places I discovered in the house I grew up in. Later, after my parents split up, I lived with my mother in multi-family housing in Colorado, where I was very aware that while we were living differently, there was a stronger sense of community. I developed an interest in the synergy between space and sociability and my studies were influenced by the concept of design as social science.

You’re often described by your peers as being inspired by Scandinavian sensibilities, as well as modernism. Where do these influences come from?

The side of my family from Sweden came to the United States in the 1880s, but there are many similarities between the issues around light in Seattle, where I work, and the Scandinavian countries. Letting in the light is one of my preoccupations, as well as creating a sense of openness and comfort in the home. These are concepts that are also embraced in Scandinavia.

Which of the residential projects you’ve worked on are you most fond of?

There’s a farmhouse that we worked on in Washington State’s San Juan Islands for a couple wanting a retirement home. They wanted something which felt modern and simple while taking its cue from the vernacular of the existing agricultural buildings on site; the steeply pitched roof, open interior, loft space and overall height.

The clients wanted the house to be open enough to allow them to have interaction when one was upstairs and the other downstairs, which we achieved with a two-story living room incorporating a loft above. It was a home they wouldn’t be living in all the time, and they needed a way to protect their art collection from the elements. We added 20-foot (6 m) sliding shutters across the whole western façade.

Which other projects are you most proud of?

I particularly liked the headquarters we created for a rather provocative New York City media company. It was a three-story conversion of an old building occupied by writers who wanted a space with plenty of daylight, which could transform to a dramatic event space by night. It was fun to bring the old and the new together.

What are your considerations when modernizing or repurposing old buildings?

A respect for materials. In Seattle, mid-century buildings were created out of the most incredible heavy timber you don’t find today, which are a characteristic of the area. You don’t want to tear them down. Where the timber affects the look, as in one project which whose former rustic lodge-style exterior—all peeled timber poles—made the home look like a nature store. We removed the heavy articulated logs, and replaced them with a thin steel framework, opening up the space both physically and visually. These timber logs were taken elsewhere for reuse.

What is your own living model?

I live in a 100-year-old house in a neighborhood that used to be a fishing village. I remodeled it to include an apartment to make it a multifamily home. It’s a very personal space that’s open-flowing from living to dining to kitchen, in which I can display artwork and other things collected from my travels. You wouldn’t walk into my home and think it was designed, but you might feel interested in it; my goal is that you should be aware of comfort, light, and food when entering a home.

You have expressed a passion for building in harmony with the vernacular. How did you apply this to the beach house retreat you created in Maui, Hawaii?

We drew on the concept of a surfing hut for three connected lodge-like buildings—the sleeping areas, main living quarters, and guest suites—which follow the topography in a gentle curve. The structure blends in with its surroundings thanks to rammed earth walls that are a mixture of local soil and concrete, and we roofed the huts with corrugated iron, taking inspiration from traditional Hawaii homes that help with natural ventilation on a site with virtually constant winds. The window walls of the central hut swing up on two sides, opening fully to the landscaped hillside, and pool and ocean views, and the ipe decking and screened walkways connecting the huts almost double the livable area of the home.

What projects have you got coming up?

I’m working on a multifamily housing project for a university in Vancouver which is adjacent to the college, an artists’ village in San Diego for both living in and making art, and a new neighborhood in Wine Country at Healdsburg, California, on the site of a 10-acre (4 ha) former lumber yard.

How important is sustainability to you?

Sustainability is key. I have worked on several LEED projects and working to the WELL Building Standard, Living Building Challenge, and COTE Top Ten Toolkit also informs our designs. A central concept of Olson Kundig projects is to design for flexibility and longevity. We have worked on a wide variety of adaptive reuse projects, which transform existing buildings for new purposes.

What kind of work would you still like to do?

I’d like to get involved with affordable housing projects that are really creative in exploring the reuse of waste materials—that kind of repurposing really speaks to my interests as an architect.