A Tiny LED Matrix is Better With Friends 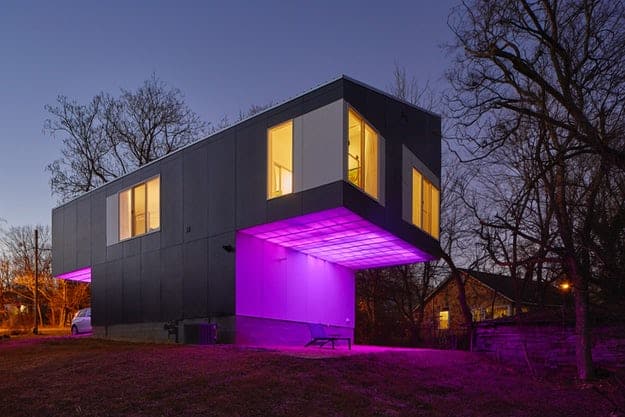 LEDs are a brilliant solution to any dark dilemma.

Light Emitting Diodes, or LEDs, are revolutionizing the way we see architecture, and it’s about time. In the 139 years since Edison patented the first light bulb, lighting technology has remained essentially the same. Despite occasional improvements to their luminosity or lifespan, incandescent bulbs have continued to be inefficient, fragile and, sometimes, even dangerous.

LEDs, on the other hand, are a brilliant solution to any dark dilemma. Unlike traditional bulbs, which typically last less than 2,000 hours before needing replacement, LEDs can burn for tens of thousands of hours uninterrupted. Not only do they last much longer than other light bulbs, but they consume 90% less energy and, because they are manufactured without mercury or other toxic substances, at the end of their useful life they are 100% recyclable. In addition to the environmental benefits, the low voltage required to operate LEDs and their reliable construction makes them suitable for both indoor and outdoor use, even in the most extreme climates.

Best of all, many LED products have variable color and intensity settings which can be controlled remotely by automated sensors, computer software and smartphone apps. With over 16 million colors in the RGB spectrum, the design possibilities are virtually endless. These stunning lights don’t just highlight the features of a building, they become one.

Located in Gangnam, an area of Seoul best known internationally as the namesake of Gangnam Style, a Korean pop song which became an internet sensation in 2012, the previous appearance of the Chungha Building was decidedly less exciting. The 1980’s exterior, clad in beige stone and plastered with competing logos, had become an eyesore amongst the surrounding high-end storefronts. MVRDV’s complete redesign of the building transformed the façade into a sculptural assemblage of shop windows, giving each brand a unique street presence while creating a harmonious whole. As the architects explained: “The building’s façade becomes more advertisement, and in that sense paradoxically more honest.”

The new exterior is covered in small, round mosaic tiles, produced by M&S Ceramic, which pay homage to the original stone architecture while giving the façade a contemporary, almost Styrofoam-like finish. The glazing is fritted with a similar mosaic pattern, creating continuity between the glass and the stone, while controlling the amount of sunlight in the stores. In true Gangnam style, the perimeters of the storefronts have been equipped with LED strips, manufactured by Total LED, which can be programmed to glow a lively array of colors. These lights and the variations in the fritted glass ensure that the façade never again appears monochromatic.

This 30,000-square-foot addition to The Städel Museum was built entirely underground to preserve the view of the original 1878 building and the popular green space fronting the museum. This strategy presented a unique challenge to the architects: how does one design a building that is unobtrusive but visually striking at the same time? Their elegant solution was to create a domed concrete structure, covered in a layer of turf and perforated by a grid of 195 skylights. These deceptively simple-looking skylights, created in collaboration with Licht Kunst Licht, are actually a complex assembly of parts, designed to illuminate both the galleries below and courtyard above.

The glass lenses, some of which measure up to eight feet in diameter, are laminated and fritted to create a slip-resistant surface capable of supporting foot traffic. Below the glazing are shading devices, controlled by daylight sensors, which automatically regulate the amount of natural light entering the space. Around the inner perimeter are rings of white LEDs, custom fabricated by Zumtobel. The LEDs illuminate the courtyard during evening hours and provide supplemental gallery lighting on cloudy days. At the base of the skylights, translucent membranes diffuse the natural and artificial light evenly into the subterranean galleries, while protecting the artworks from direct UV exposure.

The Mood Ring House is an experimental single-family home designed by its owner, the principal architect of SILO AR+D. According to the firm, the design “explores how architecture can have different day and night presences with distinct experiential and spatial qualities.” This ambitious goal was made even more challenging by the project’s shoestring budget of only $80 per square-foot, which necessitated the use of low-cost and readily-available building materials. The façades are clad in fiber cement panels, manufactured by James Hardie, and the roof is finished in aluminum coated steel sheets, manufactured by Galvalume. Chain-link railings and double-walled polycarbonate soffits enhance this modest aesthetic.

The home gets its name from the inexpensive LED lights, manufactured by Supernight, which are concealed within the soffits. These smartphone-controlled lights can be programmed to shine a multitude of colors depending on the mood of the family. One night an inviting blue could welcome dinner guests while the next night a fiery red might let neighbors know their music is too loud. This ever-changing façade has inspired neighbors to replace their bland exterior lights with colorful LEDs, “transforming the neighborhood into a Rainbow Light District.”

Ports 1961’s flagship store occupies a former office building in the commercial district of Shanghai. UUfie, in collaboration with Inverse Lighting Ltd., developed an expressive new storefront, fitting for the iconic clothing brand. Conceived of as an ‘iceberg’ floating in the city, the three-story building is skinned entirely in glass blocks. Unlike traditional glass block constructions, which are two-dimensional, UUfie created a sculptural storefront through a combination of standard square blocks and custom fabricated corner blocks. The L-shaped corner blocks create a serrated main façade which steps in towards the entrance while, on the other elevations, the square blocks step out to create virtual display windows, equipped with LED monitors. The blocks are satin-finished and supported by a stainless steel frame, which was shot-blasted to match the matte finish of the glass.

The façade is lit by linear LEDs, manufactured by Luci, which are installed behind the blocks, along their mortar joints. These light strips face inward, illuminating the glass indirectly which, according to the director of Inverse Lighting, “smooths out any imperfections… to achieve a homogenous lighting effect.” The white lights have an adjustable brightness and a color temperature of 4600 Kelvin, giving the façade a uniformly icy glow.

The Watercube is an Olympic swimming center, built for the 2008 Summer Olympic Games in Beijing. After studying different aquatic forms for inspiration, PTW Architects, in collaboration with Arup engineers, decided to base the design on clusters of bubbles, known to the scientific community as the Weaire-Phelan structure. The designers input this complex geometry into modeling software which automatically generated 3D CAD files that could be sent to steel fabricators. Once the steel frame was erected, it was infilled with inflatable cushions made from ETFE, a lightweight and durable membrane, similar to Teflon. These 4,000 translucent cushions allow ample natural light into the stadium while the air pockets insulate the space from direct heat gain. This construction resulted in a 30% reduction in overall energy consumption, including a 55% reduction in daytime lighting costs.

At night, the façade is illuminated internally by almost half a million Cree XLamp LEDs. Although usually deep blue, in 2013, as part of an installation by Chinese artist Jennifer Wen Ma, the color and brightness of the LEDs were in constant flux. Similar to the Mood Ring House but at a national scale, the lights were controlled by a computer program, which would interpret the public’s mood on Sina Weibo, China’s major social media network, and translate that information into waves of color. You can catch a glimpse of this vibrant light show in the GIF above and you can learn more about the installation here.